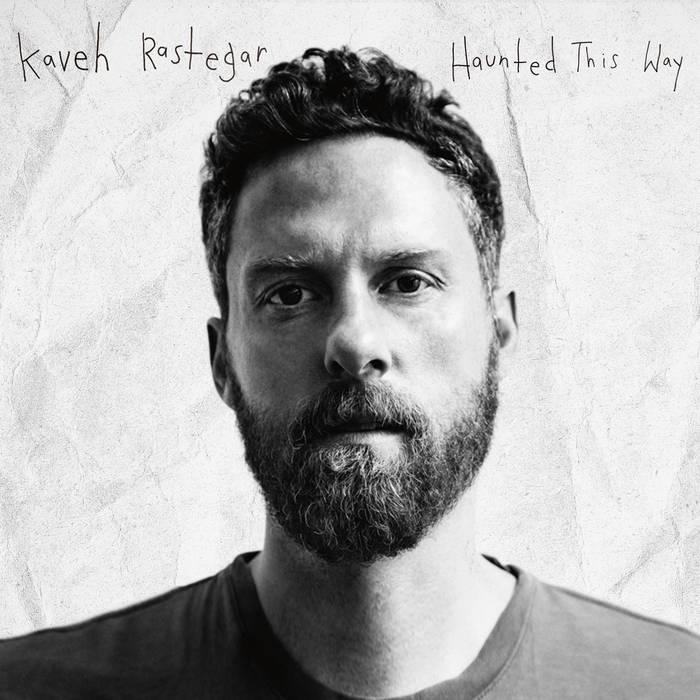 Kaveh Rastegar is a bassist, multi instrumentalist, producer and recording artist who has collaborated with a long list of artists. As a bassist, Rastegar is best known as a founding member of the genre-blurring Grammy Award-nominated quintet Kneebody. He’s also toured the world with superstars like John Legend (and also appeared as his fictional counterpart in the beloved musical La La Land), recorded with artists like Shania Twain, Beck, Ringo Starr, Colin Hay and served as musical director for songwriter/hitmaker Sia, and works with R&B sensation Sabrina Claudio as both songwriter and co-producer. As a songwriter he’s penned songs with and for heavy hitters like Bruno Mars, Ceelo Green, Meshell Ndegeocello, De La Soul, Dawn Richard, Kimbra, Marsha Ambrosious and Ciara among many others.

WORDS ON "HAUNTED THIS WAY" by Gary Fukushima
Who is Kaveh Rastegar? It depends on whom you ask. The general public might know him best as the bassist for John Legend, or as the musical director for Sia or producer and songwriter with artists like Bruno Mars, Sabrina Claudio, Ciara, De La Soul and Meshell Ndegeocello. Jazz heads know him as the low-end anchor for the Grammy-nominated group Kneebody. Yet everyone who has continued to follow Kaveh are now starting to know him as a singer-songwriter with the release of Haunted This Way, a follow-up to his debut solo album, Light of Love. This new album confirms Kaveh’s success in converting his multi-faceted abilities and his deep reservoir of musical experience into new, rock-based creative music made compelling though disciplined thematic and lyrical focus, decorated with kaleidoscopic brilliance by the excellent cast of musicians he summoned from jazz, pop, rock, country, and every other corner of the wide musical tapestry he has traversed.

Even though Haunted This Way is the later release, it was written and recorded before Light of Love, documenting the bassist’s initial serious foray into songwriting. “These songs came about over a long period of time,” says Kaveh. “I had written the music for these songs around the summer of 2011. At this point, all I had was sketches for the songs—chords and melodies.” The songs started to take shape during the initial recording sessions, with drummer Jay Bellerose and guitarist Tim Young. The lyrics came gradually, with help from songwriters Adam Levy and Amy Kuney. “I was really grateful to work with Amy and Adam,” states Kaveh. “They are incredible musicians and songwriters and I love collaborating with them.” Kaveh credits them with helping him to become a better writer. “They helped me,” he continues, “to move out of that ‘one way to write a song mindset,” something he was told to avoid by the rapper Posdnous from De La Soul. Kaveh affirms he has “written with a lot of different artists and would always ask them what their process was,” a process we see coming to fruition in Haunted This Way.

With this release, Kaveh moves into new musical territory as the lead singer for all the songs on the album. Where Light of Lovehad multiple guest singers and many extended moments of instrumental music, Haunted This Way features Kaveh as the first-person protagonist of the stories he has written. He confirms, “My goal as a musician these days has been able to collect songs and play them in different settings no matter how formal or informal. My singing has helped to serve that function.” Kaveh acknowledges that he is “so lucky to have been able to play with incredible singers over the years,” suggesting that he doesn’t put himself in their category. “For me,” he says, “I want my singing to serve the songs—I have so many limitations with my voice that it creates some boundaries and a pallet that can be fun and challenging to work with. All things aside, Kaveh’s raw and honest singing is effective (and affective) as a powerful storytelling device.

Assisting Kaveh on Haunted This Way is a self-described “dream team” of Western all-star musicians. “Every one of these musicians means so much to me,” says Kaveh. “I consider them all some of the best musicians in the world as well as some of my closest friends. Jay Bellerose (and) I had just begun a friendship with when we recorded this. I knew him through my old friend (and producer) Keefus Ciancia who is a Denver friend. Tim Young and I have had a band together since 2003 with Matt Chamberlain(Thruster). They are both incredible. (Organist) Larry Goldings is a legend and one of the funniest and most generous and brilliant musicians. (Keyboardist) Jeff Babko is a dream collaborator and one of my closest friends. (Drummer) Abe Rounds I met through Meshell Ndegeocello and is brilliant. (Guitarist) Josh Lopez and I have known each other since we were 15. (Keyboardist) Jose Fiorilli is a wonderful person and played keyboards with Luciano Ligabue who was an Italian artist I used to play with. With the exception of Jose, all of these musicians are LA based—I guess (keyboardist and Kneebody bandmate) Adam is in Reno now (as well). This city is such a vibrant place for music making. Everyone lives here.

Consistent with his previous album is Kaveh’s vision on how to put musical ideas together in an engaging, non-formulaic narrative. “I’ve always loved to make things,” Kaveh admits. “As a kid and into adulthood I would draw. When I started on the bass, I learned by writing things—making things up and exploring on the instrument that way.” He continues, “I think that this album is a snapshot of my songwriting and producing. Making an album is always a wonderful lesson in creating and finishing an idea.”

Indeed, the songs are all complete, contrasting, poignant vignettes. From the upbeat, driving pulse of “The Hand That Holds My Heart” to the slow power waltz of the title track, “Haunted This Way”, to the rubato-rock intro to the ethereal “Atlantis”, the tempos and grooves are wonderfully varied throughout, weaving their own dramas around the lyrics, which give way at times to pleasant surprises, like an a cappella chorus at the end of “Black and Red” or an epic closer of an organ solo by Goldings on “Easy To Please”.

It might seem odd that Kaveh decided to make an entirely different album before presenting these songs in his follow up release, but it was all part of a master plan to transition listeners to a place where they could acknowledge the bassist as also a songwriter and a singer. It was suggested to Kaveh that his debut album reflect his known identity, and Light of Love was just that, a “bass album” where many of the songs began as improvised bass and drum grooves. “I feel like sometimes you need to point listeners in the direction that you're going,” says Kaveh. “You might see your own evolution plain as day but for people to come for the ride or to believe it, they need to see where it came from.” He elaborates, “the songs in Haunted this Way don't have a lot to do with my identity as a bass player. I play bass on the album but there are some songs that don't have bass at all and instead have synth bass...I guess I made Light of Love as a link to this album.”

Juxtaposing Kaveh’s two albums also create a study in lyric contrast, as the titles might suggest. Haunted This Way trends darker than its more carefree, wide-ranging sibling, exploring constant themes of unhealthy, broken relationships, losing loved ones, and regret over mistakes made. “These songs are all very personal to me but they’re not all biographical,” says Kaveh. “Some of these songs might feel heavy to listeners but I want them to know that a lot of times, these songs are about characters—characters in relationships and love.

“And hopefully above all, the music speaks to them.”

Bandcamp Daily  your guide to the world of Bandcamp

Featured sounds by K.Spark and WIZDUMB, plus Basi joins the show to discuss his latest release.